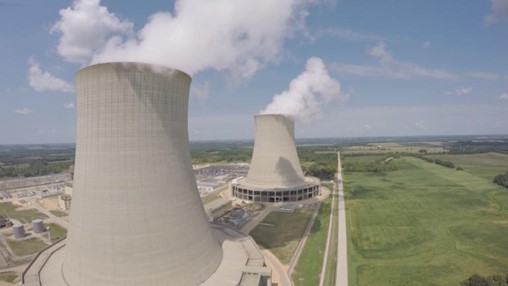 BYRON (WREX) — A group of lawmakers, including two from the Stateline, are calling for action to be taken to help save two nuclear plants, including Byron's. State Senator Brian Stewart (R-Freeport) along with Deputy House Republican Leader Tom Demmer (R-Dixon), House Republican Conference Chair Leader David Welter (R-Morris) and Deputy Senate Republican Leader Sue Rezin (R-Morris) issued a joint statement Monday. Part of the statement talks about lawmakers coming back to the table to negotiate a deal to help keep the nuclear plants in Byron and Dresden open. Here's the full statement: “If action is not taken soon, tens of thousands of workers will lose their livelihoods, millions of utility customers across Illinois will begin paying higher energy costs, and we will all suffer an immediate environmental impact equivalent to putting 4.4 million additional cars on the road, emitting carbon and other harmful sources of air pollution. Too much is at stake to wait for the demands of every individual interest group to be satisfied in a comprehensive energy package. We must act now to pass the provisions there is broad agreement on, which include preserving Illinois’ nuclear fleet and extending the state’s renewable portfolio standard with incentives for critical solar and wind initiatives. We are committed to passing these items now and coming back to the table to negotiate the more long-term aspects of Illinois’ energy future with the various stakeholders between now and the General Assembly’s Fall Veto Session in October. Time is of the essence. We cannot wait until later this autumn to protect energy jobs, protect our environment, and prevent dramatic rate hikes on utility customers.” Exelon Generation, owner of both plants, filed for decommission last week. It's among the final steps in retiring the Byron Nuclear Plant. “With no signs of a breakthrough on clean energy legislation in Springfield, we have no choice but to take these final steps in preparation for shutting down the plants,” said Exelon Generation Chief Nuclear Officer Dave Rhoades. The filings are among the final steps in retiring the plants, which face revenue shortfalls in the hundreds of millions of dollars due to low energy prices and market policies that give fossil fuel plants an unfair competitive advantage. Absent a legislative solution, these same market inequities will force the company to close its Braidwood and LaSalle nuclear facilities sometime in the next few years. With just weeks to go before the first of the plants permanently closes, policymakers continue working on legislation that would preserve all four of the plants as part of a comprehensive plan to maintain and grow clean-energy jobs, keep energy bills affordable and achieve net-zero emissions by 2050. As part of the decommissioning process, Exelon Generation has up to 60 years to restore Byron and Dresden, which includes transporting the stations’ used fuel to long-term storage, decontaminating and removing plant components and razing the remaining buildings. Byron is scheduled to shut down in September and Dresden in November.