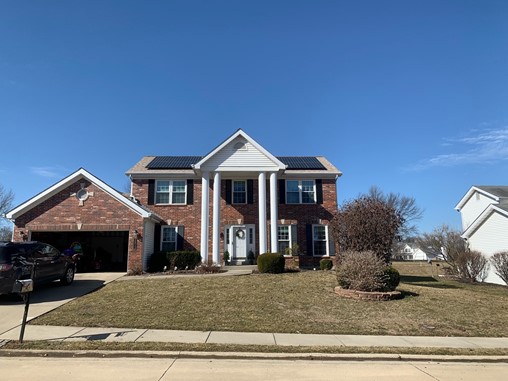 A new Illinois law expands protections for homeowners seeking to install solar and facing opposition from their homeowners associations, including by prohibiting HOAs from banning solar on specific parts of a home and banning restrictions that reduce an installation’s output by more than 10%. The law should provide relief for homeowners like Jennifer and Mark Bassler, a southern Illinois couple who were prohibited by their HOA from installing solar on the east-facing front of their home. The Basslers installed solar on the east and west sides of their home in December despite the association’s opposition, in order to receive federal tax credits before they were reduced. The homeowners association sued them in a case that is still ongoing. “I think it will help us keep our solar system,” Jennifer Bassler said of the new law. “This is also great news for other neighbors who have talked to us throughout this journey,” who want solar but are worried about the homeowners association. Analysis cited in legal filings showed the Basslers’ solar output would be reduced by 65% if they weren’t allowed to have panels on the east side, far beyond the 10% reduction permitted by restrictions under the new law. A decade-old state law prevented homeowners associations from banning solar outright and included other protections. The new law (HB 644), signed by Gov. J.B. Pritzker on July 26, expands the protections and closes loopholes, as solar advocates describe it. In addition to preventing HOAs from ruling out solar on certain parts of the home, it also extends the protections to buildings up to 60 feet tall — the previous limit was 30 feet — and speeds up the processing time for HOA paperwork. The bill does not apply to condominiums or other buildings with shared roofs. Previously, a homeowners association had 120 days after a member first asks to install solar to develop a policy on solar, and 90 days to decide on members’ solar applications. The limits were reduced to 90 and 75 days, respectively, a change that Vote Solar senior midwest regional director John Delurey said is meaningful. The legislation is effective immediately. “Delays are harmful for customers and harmful for companies. It just gums up the works in a lot of different ways,” Delurey said. “There are times when the HOA takes their time and causes delays that turn it into a yearlong project instead of the usual three to four months.” Delurey said it still remains to be seen how rigorously the new law will be respected or enforced, since in his view, “HOAs tend to do things extra-judiciously.” The Basslers’ attorney, John Albers, said that in most cases when residents come to him regarding opposition from their homeowners associations, he explains the law to the HOA, and the solar projects are allowed to proceed. But he worries that many people are dissuaded from getting solar by their HOA without ever seeking legal advice. “Homeowners need to be made aware of the law,” said Albers, who got solar on his own downstate Illinois home two decades ago when he couldn’t find a local developer and ended up buying panels from Baltimore. “Now there are installers everywhere,” he noted. “Lots of homeowners are watching this case.” Albers argues that the Orchards Homeowners Association violated the existing state law in trying to stop the Basslers from installing solar, in part through an association policy that requires approval from the association’s director for solar installations. The long-standing Illinois law says homeowners associations must have policies based on architectural standards and design requirements if they want to regulate members’ solar. The Orchards association also said solar can only be on the rear of a home. Albers argued that violated the existing state law that prohibited associations from banning solar outright, since solar on a north-facing rear side would not be economically feasible. In filings in the Bassler case, Albers argued that the association acted arbitrarily, since another home in the area has visible solar panels on its side. Solar advocates hope the need for such arguments, and standoffs between homeowners associations and residents in general, would be reduced by the expanded state law, which more clearly underscores an Illinois homeowner’s right to have solar. Bassler said the couple had long hoped to get solar since “we’re big recyclers and were trying to think of other ways we could reduce our carbon footprint.” A family member got solar, as did the school where Bassler teaches second grade. She and her husband, a firefighter, felt, “this is really a great time to do this,” she said. While it appears the new law would safeguard the Basslers’ solar installation, if a court doesn’t clearly decide in their favor they may still be required to pay the homeowners association’s legal fees, she lamented. The management company representing the Orchards HOA did not respond to a request for comment. While solar developers are happy about the new law, they fear demand for residential solar will be largely on hold until the state passes an energy bill to restart solar incentives for which money ran out last year. A bill had been widely expected to pass in the spring legislative session, but stalled at the final moment. Advocates hope lawmakers may still be called back for a special session to pass a bill this summer. “Customers are slowing to a trickle because everyone’s waiting to see what comes out of Springfield,” the state capitol, Delurey said. In the expanded protections bill, “we believe we have a really good solution. It’s time to put it to the test.” Kari has written for Midwest Energy News since January 2011. She is an author and journalist who worked for the Washington Post's Midwest bureau from 1997 through 2009. Her work has also appeared in the New York Times, Chicago News Cooperative, Chicago Reader and other publications. Kari covers Illinois, Wisconsin and Indiana as well as environmental justice topics. More by Kari Lydersen