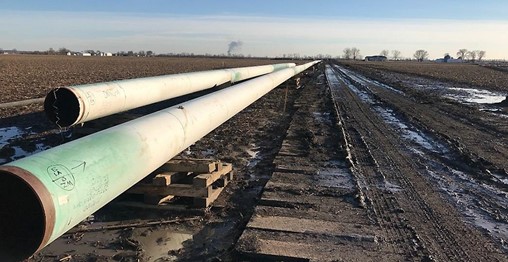 The company behind the Spire STL pipeline is seeking an emergency authorization to keep the project operating after a landmark court ruling last month axed a key approval for the natural gas conduit. Spire Inc. submitted a request yesterday for the Federal Energy Regulatory Commission to issue an emergency certificate allowing the pipeline to temporarily keep carrying natural gas to the St. Louis area. The unusual request comes after the U.S. Court of Appeals for the District of Columbia Circuit found last month that FERC had not done enough to analyze whether there was a need for the pipeline to be built. The court tossed out Spire’s certificate of public convenience and necessity, which permitted it to begin construction activities (Energywire, June 23). Following the D.C. Circuit ruling, FERC said that it was reviewing the decision to determine how to respond. Chairman Richard Glick, a Democrat who had voted against issuing the original certificate to Spire in 2018, said the court ruling has added urgency to the commission’s ongoing review of its general processes for approving natural gas pipelines. The D.C. Circuit’s "unprecedented" decision to eliminate a certificate for an in-service pipeline has left the fate of the project’s operation in FERC’s control, said Sean Jamieson, Spire STL’s general counsel. As the commission considers its options, the company is looking to protect its customers from suddenly losing service ahead of the winter months, he said. "We are keenly interested in cooperating with FERC to find a solution for this," Jamieson said. When FERC approved the Spire pipeline in 2018, the Environmental Defense Fund and other critics of the project said the company had failed to demonstrate a need for more natural gas to be delivered to the St. Louis area. In its decision, the D.C. Circuit critiqued FERC for authorizing the 65-mile pipeline between Illinois and Missouri after relying heavily on a single precedent agreement with an affiliated retail gas utility, Spire Missouri. The ruling highlighted broader concerns about the use of precedent agreements with affiliated companies to justify the construction of new natural gas pipelines. The pipeline has provided a needed source of natural gas to thousands of customers, helping to keep service reliable and affordable during Winter Storm Uri, which caused devastating blackouts in Texas earlier this year, Spire STL wrote in its application. “During Winter Storm Uri in February 2021, Spire Missouri estimates that without the STL Pipeline, up to 133,000 of its customers would have been without gas service, and customers overall would have experienced an increase in gas costs of up to $300 million,” the application said. The pipeline’s certificate technically remains valid pending an Aug. 6 deadline for either FERC or Spire to seek a rehearing of the case in the D.C. Circuit. If neither party petitions for rehearing, the court would close out the case. Jamieson would not say definitively whether the company plans to request a rehearing. He noted that the circumstances of operating the pipeline are now much different from when the project was first authorized, and there is now a greater need for the project. "We are exploring all possible legal paths to secure continued operations of this pipeline," he said. Jamieson said that eliminating Spire’s FERC certificate was not an appropriate remedy for the commission’s failure to adequately assess the need for the project, and shutting down the pipeline should be "completely off the table." While not common, the Natural Gas Act allows FERC to issue temporary certificates "in case of emergency," he said. He said the court should apply the "Allied-Signal" test established by a 1993 D.C. Circuit ruling. The test calls on courts to consider whether tossing out an agency action would lead to "substantial and significant disruption." "Whether this pipeline is needed or not is something the FERC will have to make a decision on," Jamieson said. "But it is not fair to ask the FERC to make that decision in the short period of time we have to get something cured on the eve of winter." FERC declined to comment on the company’s application, citing its policy against speculating on “potential future decisions on matters pending before the Commission,” the agency said. Any action FERC takes on Spire should address the issues raised by the D.C. Circuit ruling, said Carolyn Elefant, an attorney at representing approximately 20 landowners along the route of the pipeline. For example, she said, the court wrote in its order that the agency “failed to balance the benefits and costs” in deciding to issue a certificate order for the project and ignored “plausible evidence of self-dealing” between Spire and its sole shipper, a utility company that is a corporate affiliate of the pipeline developer. “At the end of the day, the D.C. Circuit said, ‘We’re doubtful FERC should rehabilitate this certificate,’” she said. “So any action FERC takes, it’s OK if it’s a Band-Aid, but what it can’t do is put Spire in a position where FERC isn’t able to carry out the mandate that the D.C. Circuit told it to take.” FERC could also impose conditions on the project, which might include requirements that the company remedy landowners’ concerns about the pipeline’s impacts, if it were to issue an emergency certificate, Elefant added. Spire is currently engaged in condemnation hearings for about 40 landowners in Missouri and Illinois whose properties are located in the pipeline’s right of way and who did not reach voluntary agreements with the company, said Elefant. Given that those proceedings are underway or will begin in a couple months, it would be helpful for FERC to take some action or “at least send some signals” before the company is potentially given legal title to more landowners’ properties, Elefant said.