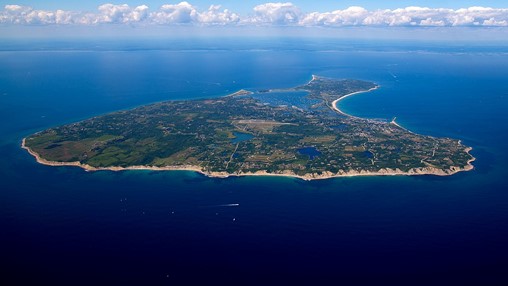 A small Rhode Island utility this year did something virtually unheard of in its industry: It lobbied for permission to buy more solar power from its customers. Net metering, in which utility customers are paid for unused electricity they send back to the grid, has been a contentious subject across the country. Many utilities see it as a threat to their profit-driven business models. The Block Island Power Company, which serves about 1,600 members on the 109-square-mile island, is in a unique position as a ratepayer-owned nonprofit. The utility recently persuaded state lawmakers to remove a cap that had limited net-metered power to 3% of its peak load. “We are proud to be one of the few electric utilities that are asking for a net metering cap to be lifted,” said Jeffery Wright, president of the utility, also known as the Block Island Utility District. “That is primarily because we are now a member-owned and -governed utility district.” Rhode Island Gov. Daniel McKee signed legislation (SB 22) this month that allows the district — as well as the Pascoag Utility District in the northwestern corner of the state — to set its own maximum percentage, subject to approval by the state Public Utilities Commission. The district reached the previous cap 18 months ago, and more than 30 applications for solar power have stacked up in the meantime, Wright said. A hugely popular tourist destination and officially the town of New Shoreham, Block Island received legislative approval to establish a utility district in 2018 and then acquired the assets of the previously privately held power company. The nonprofit, ratepayer-owned Block Island Utility District began operations in 2019. Public power is “the best business model there is for an electric utility,” said Wright, who has run the district since its start. “I am a public power champion — whether it is a co-op, muni or utility district — and this recent net metering milestone is an example of why.” Under net metering, customers who own solar panels draw on their own power when they are generating enough, and draw on power from the grid when they are not. If they generate excess power, it is sent to the grid. At the end of the month, the utility or electric distribution company charges them for the “net” — their consumption minus their generation. Utilities and distribution companies around the country have furiously fought net metering as solar adoption has grown more widespread. They argue that because solar customers who buy less power pay a lower share of transmission and distribution charges, those costs are being shifted onto non-solar customers. That argument has been the subject of hot dispute. Wright says the ratepayer-owned model allows them to focus on what members want — in this case, more solar — “and do the work to come up with a fair solar credit but at a level that doesn’t force a cross-subsidy between utility members.” In Rhode Island as a whole, net metering has been far less a matter of debate than the subject of where to cite large solar arrays, said Michelle Carpenter, managing director of development for Turning Point Energy, a large solar developer. “We are one of the smallest and most densely packed states, so there is an immense amount of pressure around land use,” Carpenter said. “It’s been the number-one challenge all of these communities are dealing with: How do we ensure we have clean energy but that we’re not putting it in places it shouldn’t be?” On Block Island, expanding rooftop solar power aligns with the community’s conservation ethic, said Anthony Pappas, a resident and volunteer program director for the island’s nonprofit Solar Initiative. Nearly half the island is permanently protected. And the country’s first offshore wind farm spins a few miles offshore; cables from that farm connected the island to the regional electric grid for the first time in 2017. The Solar Initiative offers subsidies to help residents adopt rooftop solar. Last year, its first full year in operation, the program issued more than $500,000 in subsidies, including fully funding systems on about 30 homes that are deed-restricted for affordability, Pappas said. “Funding comes from a very generous donor who wants to remain anonymous, although it’s a known secret on the island,” he said. The utility district is close to finalizing a new net metering tariff that will be both fair and as close to revenue-neutral as possible, Wright said. It will be adjusted annually, based on the district’s avoided power supply, capacity and transmission costs, he said. One complication is that the utility is not allowed to reverse flow onto the grid — a contract with the wind-farm cable owner, National Grid, prohibits that because there is no additional capacity to add more generation to the wind farm exports, Wright said. So the new limitation on net metering will be based on the island’s lowest daytime load — which will probably work out to a maximum of 700 to 800 kilowatts, he said. About 300 kilowatts are installed now. “Unfortunately, we really can’t go any higher because of the reverse cable flow issue,” he said. “It’s too bad, because during the summer months our peak is around 5,000 kilowatts and that will only be 16%.” The district has been working with local solar developers, Cool Energy and Entech Engineering, to come up with a tariff policy. While those conversations have at times resulted in some tension, “we all listened to each other’s points of view and worked toward a common goal,” Wright said. “That is the advantage of a small island community. On the mainland, I’ve never seen any type of cooperation between the utility and developers.” Lisa Prevost is a longtime journalist based in Connecticut. She writes regularly about housing, development and business for the New York Times. Her work has also appeared in the Boston Globe, CNBC.com, Next City and many other publications. She is the author of "Snob Zones: Fear, Prejudice and Real Estate." A native New Englander, Lisa covers Connecticut and Rhode Island. More by Lisa Prevost