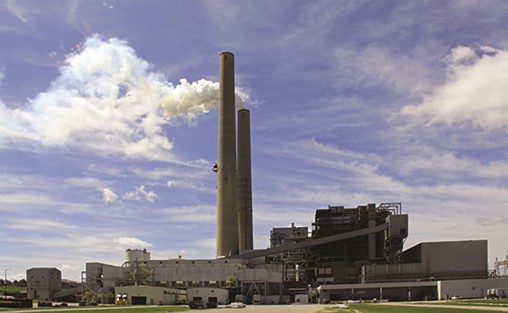 CenterPoint Energy could begin construction of two new natural gas-fired units to serve electricity customers in Indiana as soon as next year, if state regulators approve the utility’s plan that includes the closure of two units of a coal-fired power plant at a site along the Ohio River. CenterPoint’s $323-million proposal to the Indiana Utility Regulatory Commission (IURC) is part of the utility’s long-term power generation transition. The plan includes construction of turbines to provide 460 MW of gas-fired power, perhaps as soon as 2024, along with the late 2023 retirement of two coal-fired units at the A.B. Brown Generating Station in Posey County, near Evansville. The Brown plant currently has two 88-MW gas-fired units, along with two, 245-MW coal-fired units. The utility, formerly known as Vectren in Indiana and Ohio before being bought by Texas-based CenterPoint, originally announced its intention to close coal units and add more natural gas and renewable generation in an Integrated Resource Plan (IRP) filed in June 2020. Cost Recovery Sought The most recent filing, presented to state regulators on June 17, also says CenterPoint will seek approval to pass the project’s costs to customers through a rate increase. CenterPoint reportedly said the plan would add about $23 a month to the bill of a customer that uses 1,000 kWh of electricity. The utility, which in a news release said the filing “will have no immediate impacts on residential electric bills,” acknowledged that “following approval by the IURC, cost recovery of the proposed natural gas generation turbines will be requested through an electric rate review process expected in 2023.” CenterPoint Energy in the 2020 IRP said its preferred generation portfolio over the next 20 years included renewable energy resources that would generate about two-thirds of the company’s power, while lowering carbon emissions by about 75% from 2005 levels. The utility said it would seek to “maintain continued reliability while saving electric customers an estimated $320 million over the 20-year planning period.” ‘Introduce Significant Renewables’ Steve Greenley, senior vice president of Generation Development for CenterPoint, in a statement after this June’s filing said, “The construction of the natural gas generation turbines is the next step in CenterPoint Energy’s long-term plan to deliver on the commitment to introduce significant renewables and natural gas into our portfolio as outlined in our 2020 Integrated Resource Plan. The retirement of our smaller, inefficient coal units and adding the natural gas combustion turbines will continue to reduce our emissions and maintain our focus on the environment while providing our customers a cost-effective option for delivering safe and reliable energy.” CenterPoint’s plan also includes 50 MW of solar power from a site in Troy, Indiana, which is already in service. The utility in February filed a request with state regulators seeking support for the acquisition of a 300-MW solar array, along with a power purchase agreement for an additional 100 MW of solar. Greenley said, “CenterPoint Energy’s long-term generation portfolio transition will meet growing demand to provide cleaner energy for our region while maintaining the reliability our customers deserve and have come to expect.” The utility said it serves about 145,000 electricity customers in seven counties in southwest Indiana. Several Indiana coal plants have been retired in recent years, with more scheduled to close. American Electric Power (AEP), which in 2019 reached an agreement to close Unit 1 of the two-unit, 2.6-GW coal-fired Rockport power plant in Indiana, in April announced a plan to close Unit 2 of the facility. Both units at Rockport are now expected to be shuttered by year-end 2028. Northern Indiana Public Service Co., better known as NIPSCO and the utility serving much of northern Indiana, in 2018 said it would retire four coal-fired units at its Schahfer Generating Station in Wheatfield by 2023, another coal-fired unit in Michigan City by 2028, and increase its generation from renewables as part of its “Your Energy, Your Future” initiative. NIPSCO in February of this year said Units 14 and 15 at the Schahfer plant would be shut down by the end of 2021. NIPSCO said those units are among the oldest in its generation fleet, having come online in 1976 and 1979, respectively. —Darrell Proctor is a senior associate editor for POWER (@POWERmagazine).