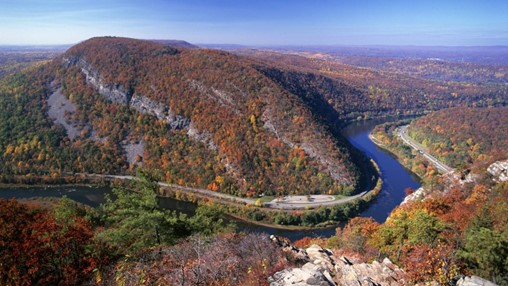 The Delaware River Basin, a 13,539-square-mile area bisected by a sparkling river that stretches from New York’s Catskill Mountains to the Delaware Bay, is officially closed to fracking. Last week, a little-known but powerful interstate commission called the Delaware River Basin Commission, or DRBC, voted 4-0 to make a 2010 de facto ban on fracking in the basin permanent. The ban, which outlaws fracking in Marcellus Shale gas deposits in the parts of the four states that fall within the basin’s boundaries, is the result of more than a decade of work by regional environmental groups and growing public opposition to fracking. It may be the biggest anti-fracking milestone in the Northeast to date. Vermont, Maryland, and New York state permanently banned fracking in 2012, 2017, and 2020, respectively, but Vermont doesn’t have any natural gas to speak of, while Maryland and New York have small reserves. Get Grist in your inbox Always free, always fresh Ask your climate scientist if Grist is right for you. See our privacy policy Seven Pennsylvania counties within the Delaware River Basin sit over the northeast’s Marcellus Shale rock formation, which holds trillions of cubic feet of natural gas. Natural gas is extracted from the shale via a process called hydraulic fracturing, or fracking, which typically involves shooting pressurized water mixed with sand and chemicals — some of which, like methanol, are hazardous to human health — into the shale to crack it open. Those chemicals can seep into the surrounding environment and have been found in drinking water supplies. “This is a really important win both for the environment, for the Delaware River Basin and for all the groups who have been fighting this for so long,” Wes Gillingham, associate director of Catskill Mountainkeeper, one of the environmental groups that has been pushing the DRBC to adopt a permanent fracking ban, told Grist. “To see the whole basin protected, the whole watershed, this whole ecosystem which is one of the most pristine ecosystems on the East Coast, it’s a wonderful thing to be part of.” The official ban on fracking in the basin has been a long time coming. The DRBC, made up of the governors of New York, New Jersey, Pennsylvania, and Delaware along with the northeastern division head of the U.S. Army Corps of Engineers, started kicking around the idea of regulating hydraulic fracturing in 2008 in response to Pennsylvania’s shale boom and stopped approving new drilling in the basin in 2010 while it figured out what kind of permanent regulations to adopt. The commission faced pushback from a group of landowners in gas-rich Wayne County, Pennsylvania, in 2016, who sued the DRBC in federal court, arguing that the commission didn’t have jurisdiction over their land. That lawsuit was thrown out, and in 2017, the commission proposed a permanent ban on fracking that was finally officially adopted last Thursday. The Wayne County lawsuit, however, was brought back from the dead on appeal in 2018 and is still ongoing today. That lawsuit will play out in Pennsylvania over the coming months or maybe even years, but it’s clear that the landowners don’t have the support of their Democratic governor. In a statement read aloud at the DRBC hearing approving the fracking ban last week, Pennsylvania Governor Tom Wolf said he was “proud to join with other DRBC commissioners in preserving the water resources of this unique region for generations to come.” Natural gas groups are livid about the DRBC’s decision and the federal government’s role, or lack thereof, in the vote. The Army Corps of Engineers representative abstained from voting for or against the fracking ban last week, saying that the Biden administration was still undergoing a period of transition and didn’t give the corps a direct command on how to vote. “This vote defies common sense, sound science, and is a grave blow to constitutionally protected private property rights,” David Callahan, the president of an industry group called the Marcellus Shale Coalition, said in a statement. “We were hopeful that President Biden would keep his vague commitment to not ban fracking, as he told Pennsylvania voters over and over.” Biden has not banned fracking — he can’t do that without congressional approval — but he has imposed a moratorium on new oil and gas leases on public lands. Environmental groups aren’t totally happy with the ban, either. It doesn’t prohibit the export of water from the Delaware River to areas outside of the watershed for fracking projects, nor does it ban the import of fracking wastewater from outside projects. However, the DRBC voted 5-0 to approve a resolution to start the rulemaking process for imports and exports of water for and from fracking. “Hopefully we can extend the fracking ban farther and farther,” Gillingham said. “Every day, there’s more science that comes out that shows this is really not safe, and that’s not even mentioning what it’s doing to our climate.” Will Biden deliver on climate? Get weekly analysis of federal climate policy action in the first months of Biden’s term.