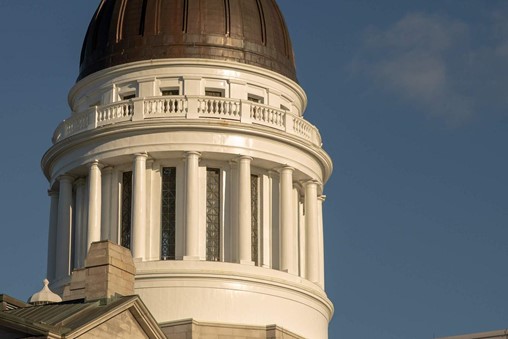 Democrats have maintained control of the state Legislature, increasing their numbers in the State Senate by a single seat to 22, while losing some seats in the House but still maintaining control. State House bureau chief Mal Leary spoke with All Things Considered host Nora Flaherty to explain what control of the Legislature actually means. This interview has been edited for clarity. Flaherty: At the top of the ticket, we have races like president and the Senate. Those have dominated this election season. But control of the state Legislature is also a big deal. Were there any surprises this year? Leary: There are always surprises every election year. I would say the biggest one this year was Senate Republican Leader Dana Dow being defeated by freshman state Rep. Chloe Maxmin. But there were also at least half a dozen House seats that shifted to the Republicans, and that could reach a total of 11 based on expected recounts that have yet to be actually asked for and scheduled. But even with those gains, the Democrats still maintain control of the House of Representatives. So what does having control of the Legislature really mean? I think the most important part is that it means setting the agenda for when legislation is considered, and it means control of the Legislative Council. Well, the council oversees operations of the Legislature. It’s made up of the president of the Senate, the speaker of the House and the eight elected floor leaders from the two party caucuses. The council sets policies, they oversee the nonpartisan professional staff and they control, most importantly, bills that are allowed in for consideration after any filing deadlines. Gov. Janet Mills must be pleased if she again has Democrats in control of both chambers of the Legislature. Does that help with her getting her agenda through? I’m sure the governor’s probably quite pleased that the Democrats maintain majorities. But she’s still going to need Republican support to pass any emergency legislation. And the pandemic will likely lead to legislation that does need that two-thirds vote to pass. And sometimes, on some issues, bills will face opposition in her own party — party members that want to move forward on some issues that can get very expensive. And it looks like there’s not going to be much money around for any new initiatives. With the economic impact of the pandemic still very real, the likelihood is that any budget that gets passed will end up cutting some spending, not increasing it. We’ve been seeing a lot of Matt Dunlap around lately, the Maine secretary of state, but we won’t be for long because he is termed out. Remind me of Maine’s unique way that we choose some important positions like secretary of state. When the new Legislature is sworn in the first week in December, they actually elect three positions that are created in the state constitution: the secretary of state, the attorney general and the state treasurer. Dunlap’s term limited as secretary of state, and there are at least half a dozen candidates already that have been running for that vacancy. So far, no one has surfaced to challenge Attorney General Aaron Frey or State Treasurer Henry Beck. But that may happen after all the recounts are completed and it’s clear who will be casting votes at the joint convention to elect these officers. The joint convention is both the House and Senate meeting, so it takes 93 votes if everyone’s present in order to elect those officers. It may well be lawmakers spent as much time politicking this month, as they did in their own elections.