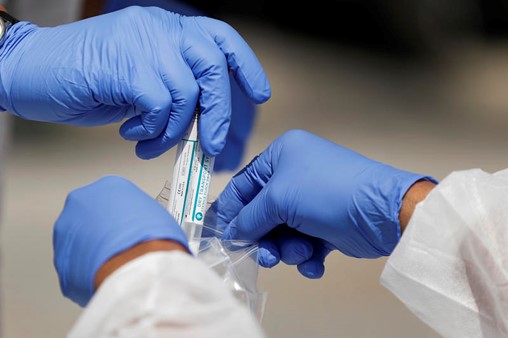 Mount Desert Island Hospital in Bar Harbor says it is receiving an increasing number of phone calls from out-of-state visitors who tested for COVID-19 before they came to Maine, then found out they were positive after they arrived. At least one other hospital says it's getting similar calls. These cases aren't captured in state data, and it is raising concerns among some hospital officials that Maine's relatively low case count could take an upswing. Mount Desert Island Hospital has been fielding these phone calls since the beginning of the tourist season. President and CEO Arthur Blank says the hospital has received more than two dozen so far. "And it's certainly picked up. And that's what our concern is, because there's obviously a lot more folks from out of state here now than there was before." Out-of-state visitors, with some exceptions, have to either quarantine for 14 days when they come to Maine, or receive a negative test result within 72 hours before they arrive. But because of processing delays at some labs, the results of those tests don't always come back before a traveler's scheduled trip. If they come to Maine anyway and get the unfortunate news that they are positive and call the hospital, Blank says staff counsels them as best they can. "...However, part of the critical way in which we keep this rate of infection down is by doing contact tracing." And that task falls to the public health department in a visitor's home state. But Blank says it is difficult to contact trace effectively in Maine if you're doing the job from somewhere else. Plus, he says, some states are struggling with high rates of COVID-19 and don't have the capacity to conduct thorough investigations. "We do know that there are people coming into our community who find out that they're positive, and we know that they've had contacts, and we're fairly confident those contacts haven't followed up with. Certainly not universally." If contacts are missed, Blanks' fear is that the disease has more opportunity to spread. And Mount Desert Island isn't the only hospital getting calls from visitors who test positive after they arrive. Dr. Evangeline Thibodeau, an infectious disease physician at York Hospital, says it happens at least once a week. "There are definitely people who come from, quote, ‘hot spots’ that test positive, and they're very surprised that they've tested positive because they have no symptoms." Dr. David McDermott of CA Dean Hospital in Greenville says that hasn't been the experience where he is. But he shares concern about the effectiveness of remote contact tracing for travelers to Maine. "So if I'm in Atlanta and I get an asymptomatic COVID infection, and I travel to Maine, and my contact tracer is trying to follow up on my test from Atlanta, it's going to be very difficult for her to track me down and do anything meaningful." Arthur Blank from Mount Desert Island Hospital says the hospital would like to do contact tracing on travelers who call them, but privacy restrictions hamper that ability. A partnership with the Maine Center for Disease Control would lift those restrictions, he says, but he has been told the agency doesn’t currently have the resources to explore that option. A spokesperson for the CDC says the agency has been working with hospitals to prepare for situations like this, and that hospitals have access to a contact tracing tool where they can enter information about any confirmed case, regardless of residence. But Blank says he doesn't think that's sufficient to provide the hospital what it needs to address the issue.