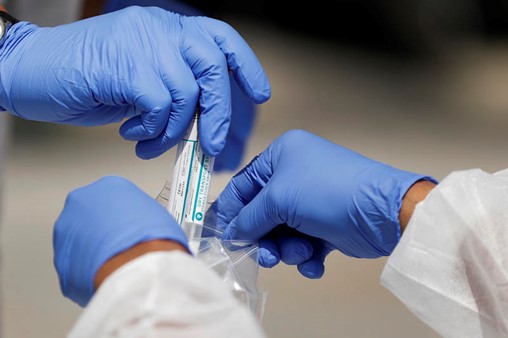 The Maine Department of Health and Human (DHHS) Tuesday announced new measures the state is taking to expand COVID-19 testing capacity and increase safety measures in Maine. At a press briefing Tuesday, DHHS Commissioner Jeanne Lambrew said that the state is opening four new Swab and Send testing sites at the Redington-Fairview General Hospital in Skowhegan, Penobscot Valley Hospital in Lincoln, York County Community Action Corporation/Nasson Health Care in Sanford, and in the city of Westbrook. Lambrew also said the state is making $1 million in federal funding available for 25 rural Maine hospitals, which the hospitals can use to expand testing capacity and for other needs, such as staff training. And the state is making a second round of funding for Maine municipalities available, as a part of the “Keep Maine Healthy” plan, which is intended to support public health and education measures related to COVID-19. On Tuesday, the Maine Center for Disease Control (CDC) reported an additional death associated with COVID-19, a man in his 70s from Cumberland County. This brings the total number of Maine deaths to 118. The Center also reported 12 new cases of COVID-19, bringing the total number of cases in the state to 3,723. There are currently 414 active cases in the state. At Tuesday’s press briefing, CDC Director Dr. Nirav Shah said there was a confirmed outbreak at the Walmart in Presque Isle, where three employees at the store tested positive for COVID-19. Shah said the CDC opened the investigation Tuesday morning, and the Center is working with the store to determine where the transmission occurred. Shah said the agency is still determining whether the outbreak originated at the work site, who needs to be tested and "...what kind of infection prevention measures can be put into place to prevent other staff as well as shoppers from getting infected going forward." Also at the Tuesday briefing, Shah said that around 19 campers at a Maine summer camp had previously tested presumptive positive for COVID-19, using an antigen test that was administered at the camp. Upon further testing, the CDC determined that the campers had not contracted the disease. The state CDC is working with the federal offices to determine if there was a problem with the testing device. The CDC is not releasing the name of the camp, since they say it does not pose a public health concern. The change in the number of positive cases will be reflected in the information on the Maine CDC website Wednesday morning. Updated 4:08 p.m. Tuesday, July 21, 2020.